A particular annoyance of mine on Linux for a while has been the inability to drop my screen into greyscale - it’s easy enough to do it on Windows, MacOS, and iOS, but over the years I’ve messed around a bit with it on Linux and haven’t actually found something that works.

But, if you’re on Gnome/Ubuntu (yes, yes, I know, but it works and doesn’t actively piss me off), there’s an extension floating around for a while that does what I want! 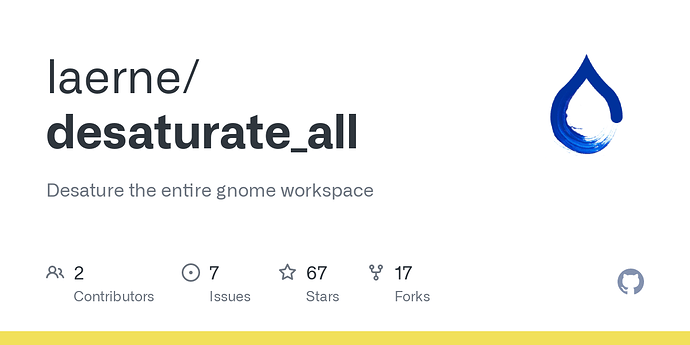 Desature the entire gnome workspace. Contribute to laerne/desaturate_all development by creating an account on GitHub.

Install it, install gnome-tweaks, restart your session, enable it in gnome-tweaks, and boom - you’ve got an icon to click and toggle color on and off. Works on Wayland too, which some of the X11 hacks don’t.

I’ve confirmed it works on my ODroid N2+, and I’ll be testing it on a few other systems later today. I haz a happy!

Excellent, works on the house desktop and the PineBook Pro too!