How Efficient is Your Generator?

Very interesting - thanks! I’ve assumed my little Kipor knockoff is about 10-15%, but I’ve not actually tested it. I just run it around 75% load and hope it’s not too bad, but now that I have the solar trailer here, I use it a lot less. I should try to get some data from it at various loads at some point…

I read recently that if your goal is to keep food cold for days in a power outage you might do better to have a small ice machine (low hundreds of watts range) rather than trying to provide enough power for a refrigerator or freezer.

A fridge or freezer doesn’t actually draw that much power. The pain in the rear with them is that most of the older types (to include recently purchased ones) have a rather hard starting compressor, with the typical 3-4x running current required to start them.

A small generator that can run the compressor typically won’t be able to start it - my office air conditioner is a perfect example here. My little inverter generator would run it fine, but it won’t start it because of that startup surge required. So you end up needing a bigger generator just to start stuff.

For freezers, an easy way to extend their service life without power is to pack unused space with water bottles or other frozen things - that phase change will keep things cold(ish) a lot longer than air will.

But, yes, those small ice machines look interesting as well. I’ve just never played with them.

I read recently that if your goal is to keep food cold for days in a power outage you might do better to have a small ice machine (low hundreds of watts range) rather than trying to provide enough power for a refrigerator or freezer.

A fridge or freezer doesn’t actually draw that much power.

Yeah, I’m completely off-grid and just have a standard modern chest freezer. Depending on the weather I think it uses between 0.8 and 1.8 kWh per day, but I really should stick a meter on it again and see how it’s performing these days…

A small generator that can run the compressor typically won’t be able to start it - my office air conditioner is a perfect example here. My little inverter generator would run it fine, but it won’t start it because of that startup surge required. So you end up needing a bigger generator just to start stuff.

That’s one area where the Victron Multiplus’ I have can really shine. Probably other inverter-chargers have a similar feature, but Victron calls it “Power Assist” where it can dynamically pull power from the batteries to help the generator through load spikes even in the middle of charging. You have to configure the Multiplus to tell it how much current the generator can handle, then it manages both charging and loads together to be under that limit - potentially engaging the power assist feature if loads exceed the limit.

I only have the 9 kW generator because it was the smallest dual fuel one I could find that provides split phase output. Hopefully, I can get enough charging hardware eventually to fall into its peak efficiency window (once I discover what that is) to minimize run-time and fuel costs.

I also discovered part way through this last tank an issue with how I was capturing load data metrics so the actual average load/efficiency was probably a bit higher. We’ll see on the next tank, but it was good to see the efficiency go up so much (from ~11%) with the increased load. It gives me some hope that with proper loading, propane won’t be such a terrible choice from an efficiency perspective.

I’m probably going to upgrade my office battery bank at some point in the next few years, which should almost entirely eliminate generator use in the winter. I have enough panel to ride through a lot, and doubling the bank capacity will help a ton in the darker weeks.

Agreed! I’m looking at doubling my installed solar capacity and tripling my battery storage in the next year for similar reasons.

Do any of you find that you need load management; a set of relays and controls to limit power for multiple appliances to one at a time? For example, if you have a fridge and a freezer, a double-throw relay that will power one or the other, but never both at the same time to avoid the power-on surge. Are there commercial (uncomplicated) methods of achieving this or do people just diy? The simplest mechanism would be to flip the relay state every 30 minutes or so. This assumes the two devices are close together enough to be hooked up to the same control mechanism easily.

The short answer there would largely be, “If you’re going to severely undersize your infrastructure, you should probably work it out manually.” Automated systems tend to fail in weird ways at inconvenient times.

However, with modern inverters, just running the generator to charge the batteries is usually the right answer. That way, the surge loads are handled off the inverter and battery bank, and the generator is just feeding, via some route or another, DC into the terminals.

However, with modern inverters, just running the generator to charge the batteries is usually the right answer. That way, the surge loads are handled off the inverter and battery bank, and the generator is just feeding, via some route or another, DC into the terminals.

Alternatively, the Power Assist feature I was describing earlier is a pretty much perfect solution to the “too small generator” problem - assuming the Victron price premium is within reach.

I guess I should’ve cut to the point:

My in laws have two houses. They regularly travel between both houses, about 50/50, typically a week at a time. But one of the houses has regular power outages. This causes problems really only for anything in the fridge.

I was trying to size a micro solar and power backup solution to keep their two fridges running. I suppose the better thing would be to just say “just one fridge” and force them to consolidate the contents when they’re away, i.e. the second fridge in the garage would be for ice, drinks, and other non-perishables only.

Since they’re compressors, I also want to build in a 15 minute power-on delay to avoid a motor stall. But maybe I’m overthinking this?

The important part is that the system needs to be self-resetting. I can’t have a circuit breaker trip because that requires a human to reset it within 24 hours lest the fridge contents spoil.

So if I estimate 2 kwh storage (where 50% of the battery might get used overnight, ~= 200 AHr * 12V) for 2 fridges, and thumb estimate 5 hrs * panel wattage on a good day (~half an hour north of Napa, CA), that means 400W of panels ought to be enough and a small 1kW inverter should keep the fridges running, and half that for one fridge.

Then, I need to figure out how to simply build a ground mount for two panels, i.e some 4x4 posts, some cement, and some sort of bracketing.

How long are the power outages? Hours, days, weeks?

It sounds like you’re more in the market for a long lived UPS than bothering with solar. An Aims inverter/charger with a bank of sealed batteries is probably the right option here - zero maintenance, and you can probably get an inverter and a battery bank with a week of runtime for less than having to mess around with solar panels for a day or two of runtime. They have a 3x overcurrent rating for startup, so if it’ll run it, it should start it - and they switch so quickly that you shouldn’t have to mess with any delays. They’re genuinely uninterruptable in normal operation, and a friend of mine backs a garage full of vacuum pumps and other lab equipment with an Aims, with no issues I’ve heard of.

Get one of the 1500 or 2000W Aims inverter/chargers, put a 24V AGM bank on it of “something tolerable,” sanity check the voltages, and let it run. Grid → Aims → Fridge. No messing around with solar and such - which, depending on how you do it, may or may not trigger code requirements. “PV wiring” running into a house starts to look like it needs per panel rapid shutdown in a lot of areas, even if it’s not for a grid tie system.

A fridge or freezer doesn’t actually draw that much power.

The two datapoints I collected:

Here’s the outdoor and internal freezer temperatures over the last 20 days:

Note #1: the internal temperature and power usage went up in the last few days because we put a bunch of food in and it is still working on reaching equilibrium.

Note #2: You can see the frequency that we open the freezer by noting the little spikes in the yellow line. We do try to open it pretty infrequently so this data might not be very representative.

The reason for designing in solar (and from-grid) charging is that due to the PG&E Public Safety Power Shutoffs (PSPS) to protect the region from wildfires, the power can be out not for hours but days! So yeah, 100 AHr @ 12V is about enough to keep one fridge running for one day (assuming 50% DoD for AGM), but it’ll need something to recharge from (unsupervised, they’d rather stay at their second house that still has power).

The Aims modules look helpful, as they combine charger and some of the units have a built-in transfer switch too.

I’ve got coming up on 7 years on my office Aims with no issues, and I can cut back and forth between external power and inverting with no drops. Another guy around here has been using one of the solar trailers as a (massive, solar charged) UPS for his print farm, and it cuts right over with no interruption when grid power drops. Want a solar trailer?

Then they can take it with them!

It’s really up to you on the solar - it can absolutely be done, I’d use AGMs for unattended use in something like this, but it adds a lot of cost, and potentially a lot of code compliance issues. A battery bank can quietly be installed and nobody knows the difference. You can’t put solar panels up without someone noticing, and at least out here, I know the power company will troll satellite data looking for “Unexpected solar panels on or near homes,” and then go take a look.

at least out here, I know the power company will troll satellite data looking for “Unexpected solar panels on or near homes,” and then go take a look.

I wonder how many hits it would take to make that infeasible? I wouldn’t imagine it’s illegal to get some 25’x50’ tarps custom printed with a solar-panel designs on them and move them around sympathetic folks’ properties periodically.

My guess is that the search is triggered by a radical change in power use that corresponds to solar production - it’s not a secret if it’s a sunny or cloudy day. Someone stops using power regularly only during the middle of sunny days, it’s worth a look. And it wouldn’t be hard to write an algorithm that looks for that sort of thing, either.

The freezer has just about reached equilibrium so I thought I’d share one more datapoint which shows the daily watt-hours coming back down again:

Here’s the outdoor and internal freezer temperatures over the last 4 days: 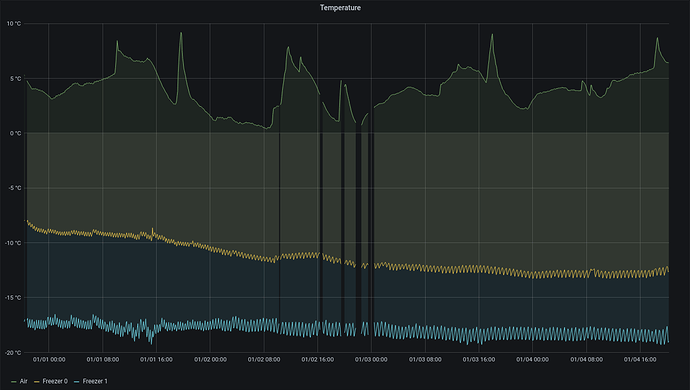