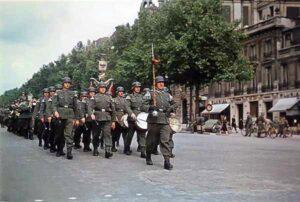 For quite some time now, utterances from the elite classes of the industrial world have had a sidelong relationship at best to the reality that most of us inhabit.  Recent weeks have seen the surre…

Anyway, I think some of the suggestions there (after you remember your late 90s and early 2000s internet, back when it was a much more whimsical place) are quite relevant - making free space/time/money in your life to be able to withstand the various system shocks that keep whipping around civilization. Don’t “load yourself up to the limit” in any metric, because when things get weird, you’re stuck - there’s no slack to take up the load.

How’s that been going for various people? I’m at what’s really a fairly comfortable point on that front - we’re not “fully loaded” in any of the various metrics, and it means that things like the recent increases in fuel prices and food prices haven’t really been more than a “Huh… well, that’s no fun…” sort of issue. But, we’ve also set our lives up such that we don’t spend much on fuel in the first place (Volt + solar), and a huge amount of that driving is rather flexible in the first place, since I work from the property.

I do think some decent food stores might be worth doing into the times ahead, just long term stuff that can be rotated in - beans, grains, etc. I don’t expect things to get much better on the cost-of-food and supply-of-food-and-energy fronts in the near future, and… they probably won’t do much better long term as we rattle down the backside of history.

Also, on the tech side of things, if anyone would like a drive with an up to date Ubuntu repo for local use and mirroring, let me know, I can ship you one! They’re darn convenient when the internet is down!

It’s a bit too dense on hyperbole and exclamation points and being just shy of incomprehensible to me to actually get most of the meat of what he’s actually trying to say. Also gave up half-way through due to the previous things for me.

Also gave up half-way through due to the previous things for me.

I found it a very good article, making an important point - very important for these days in particular, when the squeeze of stagflation and reduced access to energy are going to pinch everybody pretty hard.

Don’t forget that Slack! is an important concept, despite the playful treatment, and that it applies to all aspects of life: mental, emotional, attitudinal, health and physical, situational, economic, temporal, etc. Slack in any area can sometimes be traded for slack in another, and slack overall is both innate (you are born with some, and you usually give it away or have it stolen) and earnable (by applying yourself wisely in certain ways to provide yourself with more slack, or by changing your behaviour and arrangements to stop taking so much from you, etc.).

Slack is in essence the heart of the principle famously worded by Dickens thusly: