So we just bought a car... something something 90s 1930 Willys 8-80D, so an 8 cylinder inline poppet valve engine (not the Knight motor, but… should still be nice and smooth in operation).

Why? Because my wife’s family has been part of the WOKR club for many decades, and we’re at a point where we can get our own. This came up for sale, it’s well known within the local club, and fits what we’re looking for. There’s also a pile of Whippet parts nearby I intend to turn into a car, but this is a bit more ready to drive, which means we could take it to the meets this year, and it’s likely far better suited to some of the stuff we’d like to do, such as “taking an old car across the country.” Wire wheels instead of wooden, and a bigger motor. It’s claimed to be a 70mph car, but… I seriously doubt I’d run it up there. Mechanical brakes are not amazing.

I get the “… you’re, uh, kind of a heretic, you know…” looks when I mention things like single point fuel injection. A boost pump in the rear tank to deal with the vacuum fuel system when hot and high might be doable, but that’s probably it.

Ethanol polluted gasoline doesn’t “suck” well - it tends to turn into vapor when you try to suck it uphill, which is how the fuel system works here.

A few more photos from the sales page… Beautiful how uncluttered it is under the hood compared with a modern vehicle!

Only thing, where’s the battery? I found a forum post with a little googling - I think it’s for the same car - which suggested there’s a 6v battery in it somewhere…

Only thing, where’s the battery?

Under the driver’s feet. Lift the floor mat, remove a plywood cover, and you’ve got the battery compartment!

I mean, where else would it be?

Trip went well, car is back, will write more on it a bit later!

Excellent. Drove it around today, got it up to some speed, took it to lifegroup. 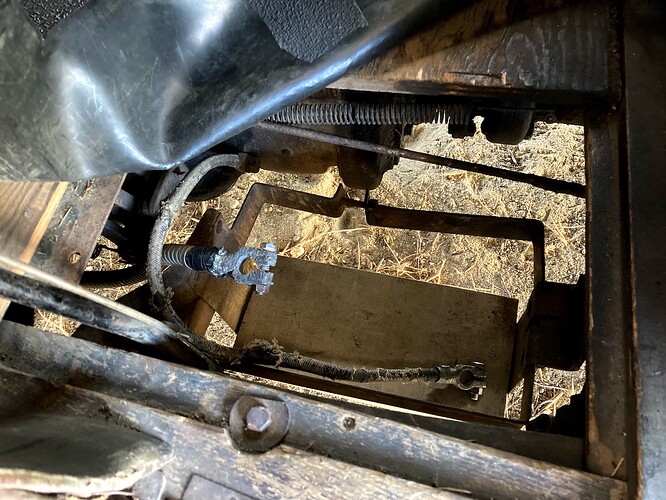 The battery it came with, which is very much undersized for this compartment, but will do the job if it’s warm out. Yes, it’s a 6V battery. At least it’s negative ground, unlike my tractor… which is 6V but positive ground. 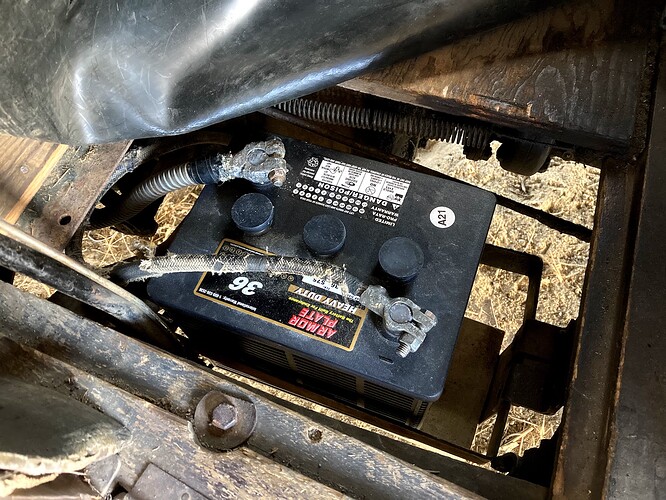 … you know, my office is on 6V batteries too. It’s a 48V pack made up of 6V batteries. So I’ve got… 12 6V batteries in active use now, and a 7th spare one I have laying around for the tractor (or the car, same thing…) when one of them acts up.

This is the battery compartment cover. 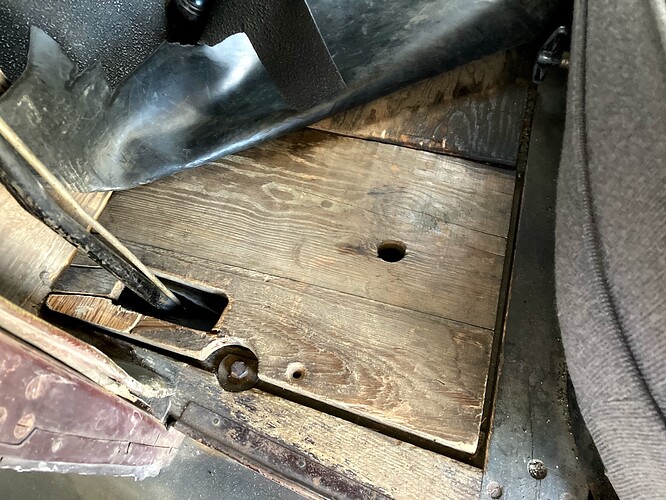 I’ve been waiting on an air filter for a while. The car came without one, and while a lot of people run older engines without air filters, we live on a gravel driveway, and I’m not OK with running around on that sort of thing without air filters. The intake is low, and behind the front wheel in such a way that I’m certain it would suck an awful lot of grit through the engine. Not good for any part of the system.

But the air filter I’d ordered wasn’t showing up, I can’t find them locally, etc. The stuff in parts stores is too big (apparently the number of people who put a high performance filter on a 2 1/8" carburetor are few and far between, and… then I looked over at the motorcycle. With a nice K&N filter hanging down that I’d cleaned recently. Turns out, it’s close enough to cinch down on the intake! 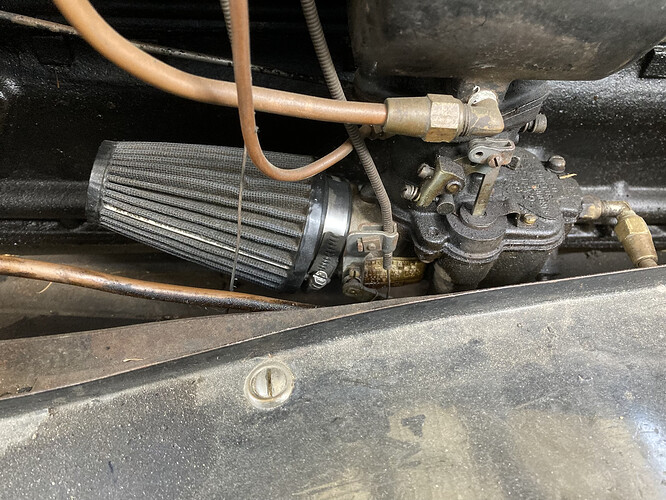 The next question was brakes. They’re purely mechanical, have a ton of pedal travel, and I wasn’t sure if they were any good or not. They also had some weird metallic chirps. However, see gravel driveway, it’s hard to really get a feel for the brakes. So I went out on the usual maintenance loop (a couple miles, with the convenient attribute of being not-that-far-a-walk home from any point), got some speed up, got on the brakes, and… hey, they work! They still need adjustment, and I still need to pull a wheel to find out how much brake material there is, but they work tolerably enough for road use right now. Not like there’s a lot of rubber on the car anyway.

In any case, I got some speed into the car, and it drives about as expected. Steering is loose in the expected way (think 1st gen RX-7, if you’ve driven one - there’s just a dead spot of half an inch or an inch of steering wheel movement before anything starts happening at the front end), brakes, if not amazing, work well enough for road use, and the car will purr along at 45-50mph if you let it. It should, on paper, go far faster, but I don’t exactly have any interest in trying out the reported 70+mph top speed of this car. I’ll just let it cruise along at my normal 50mph, slower as needed.

I still have plenty of work to do. The cables are tight and need lubrication (choke, spark, etc), the brakes could stand to be adjusted properly, the electrics are a bit sketchy (lights have a bypass switch, but I’d prefer the proper switch working, and I’ve no idea what’s going on with the original horn), etc.

But, if the weather is decent this weekend, I’ll make the drive out to get it registered. Or at least attempt to!

Are you interested in keeping it “show-stock-restored” or more looking at it as a platform to experiment with? Older vehicles (especially this old) are quite open to customizations that are relatively easy.

The particular club we’re part of is very much against much beyond “Maintain and repair it, keep running it.” It’s not going to be experimented on. We’ll repair what needs repair, fix what wears out, and just keep it on rolling!

I would be very interested in bootstrapping the tech to make efficiently-movable vehicular chassis again - 50kph cars or so. Simple, lighter weight, fewer safety features, but comfortable enough for a multi-day journey and rugged enough to be a working vehicle. They should be made out of materials and techniques that could be field repairable and restorable (and even fully copied and cloned) by a competent machine shop without the aid of CNC (not that I say you can’t use it, but that the tech should be all doable with lost wax casting or other techniques and not REQUIRE CNC or laser sintering or other forms of advanced precision fabrication).

Interesting. I wonder if you’d need to build it from an existing body to make it street legal or of there is some allowance for experimental vehicles like experimental aircraft. I’m assuming such a vehicle would be difficult to get registered for street use, but I’ve not looked at what that really requires.

There are some open source cargo bike sort of projects I’ve seen. Toss an aero shell and you’ve got an efficient velomobile sort of thing. I imagine a small internal combustion engine would power one along nicely.

Took the car down to the local town tonight, and came back on up. A few random points I’ve worked out:

I’m going to attempt a run to go register it tomorrow, about 40 miles round trip, with some hills. We’ll see how it goes! I may have to stop, cool, and refill with water once or twice, but I’ll make part of the run, see where I am, and go from there.