For those who live in the west, fire season is starting… or, rather, has been started for a while.

As we have another day of “Hrm, can only faintly make out the mountains…,” I decided it was time to try something I’ve read about, but haven’t gotten around to building in past years.

Fan Filters! You make a box of a few filters, attach a fan, and have something that can, on far less power than the furnace blower, with (ideally) better filtering, extract the crud from the air. My filters are nice, fresh, and quite white. We’ll see how they end the season. 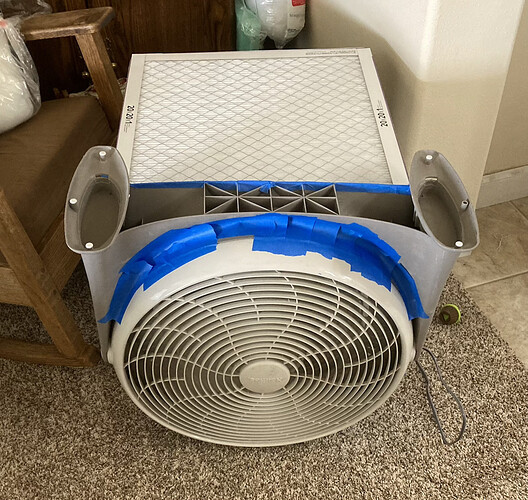 Just get creative and tape them together. A box like this both increases the surface area compared to a single filter, and gives the fan room to breathe - a single filter, strapped to the back of a box fan or such, generally won’t do much because the fan blades are sucking vacuum. This box leaves the air space for the blades to work, and also reduces the flow rate through the filters. 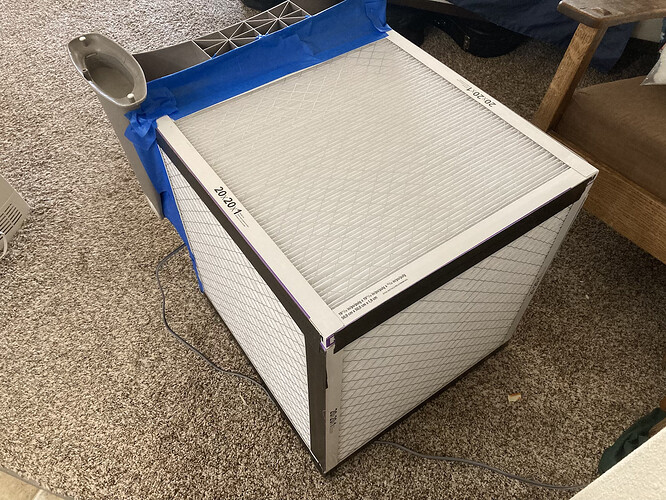 I really don’t know what to expect from this fire season. It’s started early, for sure, but it’s been a very dry spring, which would tend to reduce fires. Unfortunately, it’s also been absurdly hot, which tends to increase them. And the wildfires have already claimed a town or two this year.

If you can find a box fan, might be a good year for some filters.

Unless, of course, you just have a good swamp cooler. Then just replace the pads in the fall. I miss those things!

Welp. Mountains have gone missing. I expect to see them in about November.

That was a very orange sun yesterday morning. Indeed today the mountains have disappeared. Sigh… probably soon time to go back to wearing the good NIOSH mask when working outside. It’s not near the sub 5-mile visibility that it got to at it’s worst last year but it might be coming.

Any recommendations? I really should get in the habit of wearing a mask for working outside in this crap, and I don’t think it’s going to go away any time soon, either on a “this year” basis or on a “years to come” basis.

When you gotta wear it for hours, this is the most comfortable i’ve found: 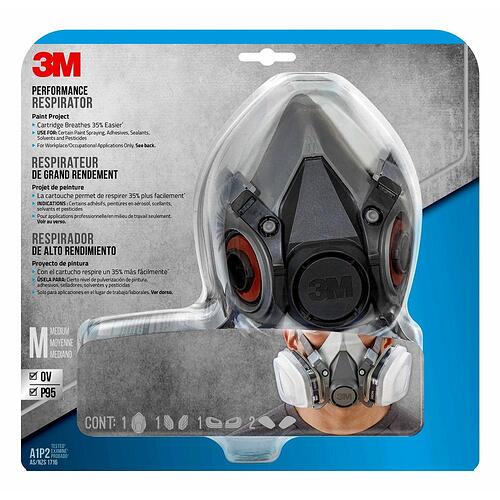 with these cartridges (from somewhere else apparently): 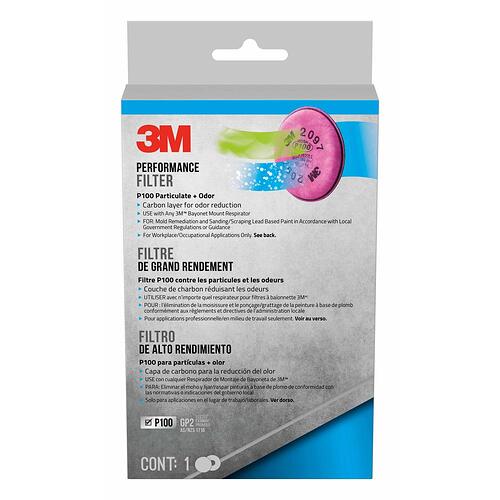 The ‘organic vapor’ cartridges it comes with is indeed great for solvents, paint, etc, but they will become expended just by being out of the package (but they have HEPA over-filters that will continue getting particles just fine. The pink ones are all you need when dealing with just that).

Best inflow/outflow I’ve found so far. The silicone facepiece is pretty comfortable, although being silicone it can get sweaty pretty quick. I’m still breathing easier with that than a typical vented N100 though.

Oh wait, that one might be fine but I just checked and this is the model I have: 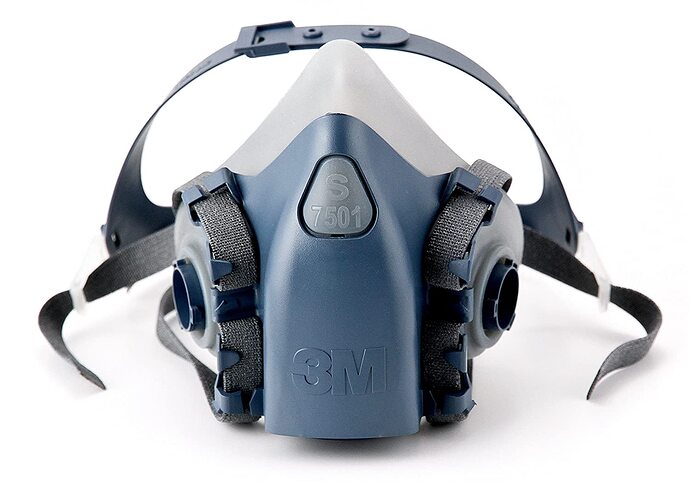 Amazon.com: 3M Reusable Respirator, Half Face Piece 7501, Use with Bayonet...

I got mine from a local paint store. Sherwin Williams I think. That was like 6 years ago, I’ve been though some pads the but the facepiece is still in great condition.

Masks ordered, we’ll see how they work. It’s back to being a biohazard outside.

But, good news, the carbon emissions of fighting fires may be dropping substantially! Apparently “Getting Jet A to firefighting strips” is now a legitimate problem. 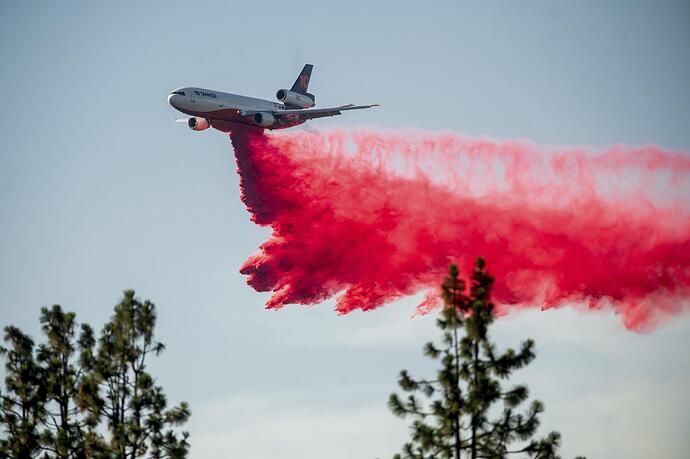 BOISE, Idaho (AP) — Airport officials facing jet fuel shortages are concerned they’ll have to wave off planes and helicopters that drop fire retardants during what could be a ferocious wildfire season , potentially endangering surrounding...

And just for informational value, and optimizing filters, some PM2.5 sensors ordered.

A couple Temtop units. One standalone PM2.5/PM10/CO2 sensor for the house countertop, one handheld unit that adds some VOC sensors for my office, roaming around, etc. Not networked, won’t be networked. The handheld unit can log and export, but that’s about where I’m going to stick.

I don’t need data logs or online access or such. I just want to be able to more or less quantify how filters are working, and address issues as they happen. I’m also somewhat interested in office CO2 levels, because it is a fairly small space, and while I normally have a window open for some vent airflow, with the smoke, that’s not happening - so, what do CO2 levels look like at the end of a day?

Looks like you’ve got some rain coming through today, at least. Might help scrub some of the stuff out for a day or two before it comes back.

Last year the outside went up to 700+ uG/m3 (fires were about 30mi away and blowing straight towards us) while the inside was pretty habitable, even if to walk the dog we’d need to wear a P100 respirator (and gee, good thing we had those).

As far as sensors go, I have a combo VOC+particulate non-networked handheld, and a PM2.5 / 25 that hooks into the WS2902 wirelessly (and then goes reports to ambient and wunderground)

Well some overcast has moved in. Current temperature is about 80 degrees. Doesn’t feel a whole lot better, because the humidity went up to 50% this morning. My hat and shirt were soaked through by 9:30 this morning. How do people live in Kansas and Texas? I want my high dry desert back…

The smoke is better though, for the moment.

Last year the outside went up to 700+ uG/m3 (fires were about 30mi away and blowing straight towards us) while the inside was pretty habitable, even if to walk the dog we’d need to wear a P100 respirator (and gee, good thing we had those).

How did you get the dog to wear the respirator? 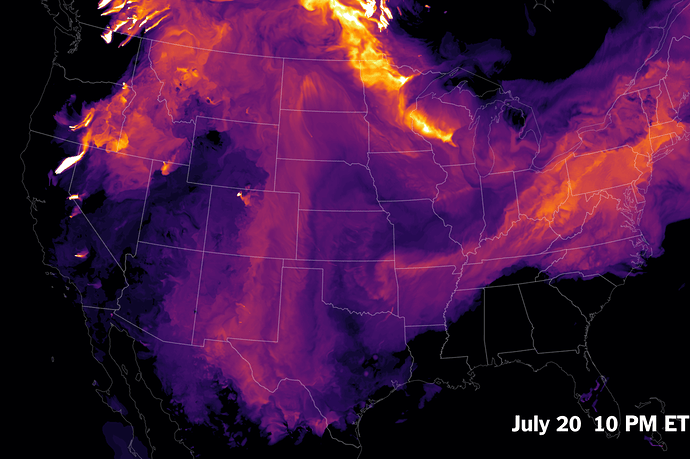 Smoke from wildfires in the Western United States and Canada covered skies in a thick haze on Tuesday and triggered air quality alerts from Toronto to Philadelphia.

From the handheld unit:

Outside (I saw about twice this at one point…) 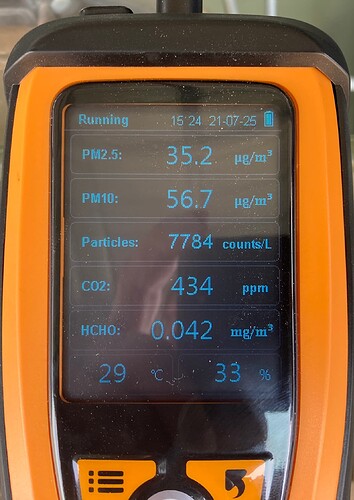 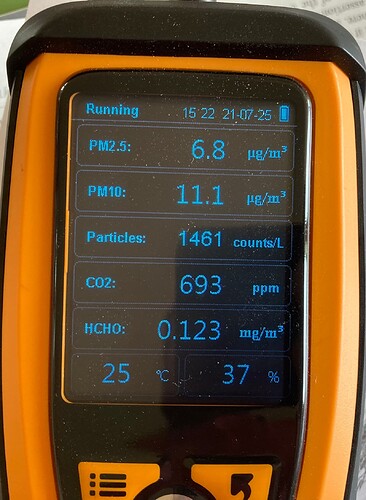 In the output from the fan filter. 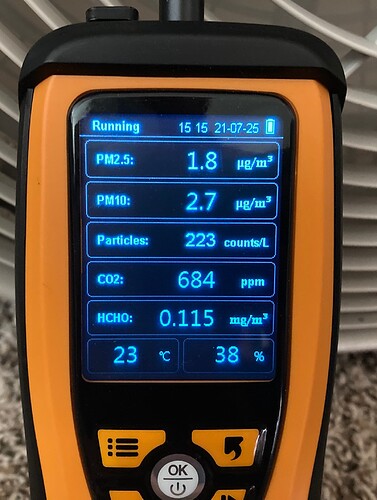 That’s not as bad as I expected. PM2.5 of 12-15ug/m^3 are considered “average” indoor values, and it takes until the mid 30’s before health authorities consider it to begin being a quality problem. Your PM10 outdoor values seem fine, overall, just barely over the annual average of 50 and well under the 24-hour average of 150ug/m^3.

I can see the mountains. It’s not that bad outside right now.

I believe 12ug for PM2.5 is the sustained recommended limit.

In any case, I can say with some confidence that this filter fan setup works, and that the house is mostly sane inside. Office checks tomorrow!

Correct, < 12ug is the annual average value limit for indoor air, 35ish is the 24-hour average limit. Over that you start to get meaningfully decreased air quality - but they stress that this is a very fuzzy scale - ANY PM2.5 is not great for you, but it is also unavoidable. On the flip side, there are no outdoor limits that I saw in the EPA standards - I assume those are covered by specific emitter policies (e.g. permissible limits for a coal-fired power station), and they can fine a forest fire all they want but it won’t change it’s emissions…

Anyways, yes, your indoor filter seems to be making a heck of a decent change in level, so I’d say that’s a win for sure. Good job, and I’m looking forward to the office post.

I mentioned it wasn’t too bad… this is somewhat worse, though still far from “as vile as it gets out here.” 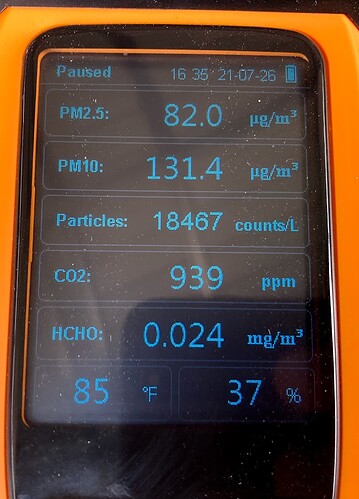 Playing with that mask @Canem suggested, it works quite well - I had a chance to use it in actually smokey conditions, and, wow, it improves air quality.

… and I figured out that if I stuff a few layers of cloth over the outlet, it probably will pass just fine for a mask with the likely renewed mask mandates coming.

My wife suggested that wearing a full painting respirator as a Covid mask was a bit absurd - which is entirely my point there. May as well get some useful smoke protection while out and about too, if someone is going to force them again.

Heh re:covid … I have full face respirators but that’s kinda overkill. Even half face with a P100 will draw some eyes, I’m sure.

They’re great for smoke protection though.