‘We have one of the world’s greatest waterway networks, but we are barely using it.”

Seems like at least a few people have figured out that moving stuff by water still makes a ton of sense once it’s inside the borders!

Much of the rail network feels underutilized to me, but I’m no expert.

I wonder what a “heat graph” of shipping looks like - i suspect it’s mostly from the west coast heading east and there’s not a ton of rivers that do that much for it.

Thinking more about it - much of modern shipping is built around just in time - which needs predictability. If a train or ship load of things arrive too early OR too late it’s a problem, which means that there are artificial constraints on shipping that may make it non-optimal.

may make it non-optimal.

“Optimal” is a very loaded term. By definition, we can only truly optimize a single variable, although we can find “optimal” compromises across multiple, but these are not objective, but rather opinions, judgements – effectively subjective “optimizations”.

So, one of the things we may need to do to increase efficiency of, say, fuel, or even time, perhaps, is to sacrifice the relative balance of another component. It is easy to deal with whatever lag time there is in a given supply chain, it is less easy to deal with jitter in that lag time - in the JIT model, that is. Or perhaps we will end up returning to the original reason distributors exist - to provide an intermediate storage location for inventory to ease the jitter, at the minor increase in price. It all depends on where the relative value is perceived to be and what tradeoffs make sense. There is no absolute, no one-size-fits all, and increasingly, there will be no “business as usual”. Building resilience will become much more highly valued in the near future than it has ever been in the recent industrial past.

I wonder what a “heat graph” of shipping looks like - i suspect it’s mostly from the west coast heading east and there’s not a ton of rivers that do that much for it.

You’ll want to look at the Panama Canal, then. There’s a reason Houston is one of the busiest ports in the world… a lot of Asian imports go through the canal and unload at Houston because it’s cheaper than sending the goods by train and the lag time - as noted above - remains fairly consistent. Granted, in the “no more BAU” situation, the canal itself has logistical issues, but that’s no different than having key rail lines tied up (or in the case of BC, burned by wildfires). When it makes sense, it makes sense. You also see a modest amount of Asian transshipment in NY and all up and down the East Coast too. That may increase if the cost of fuel continues to go up - it’s FAR cheaper to ship it by sea if processed fuel costs skyrocket, latency be damned.

Transload costs suck. Going barge <> truck tends to involve high cost longshore labour, there’s wait times, etc. That’s also why trains are fairly underused too, and why everyone, and I mean just about everyone, goes point to point unless the mass is high or the distance is long.

Obviously if transload gets cheaper, or point to point gets more expensive, the cost/benefit changes.

What if the barges carried trailers, so it’s just drive-on, drive-off? removes much of the handling costs. I know it’s probably only half as dense as the barges could maximally carry, but for things that are less time sensitive (grain vs electronics), it might make sense. That said, slower means more days paid to whatever crew is working whatever vehicle… so yeah, it’s not as simple as “well fuel is cheaper!”

Then you’re carrying a fraction of the barge capacity. Remember your tugboat is a fixed cost, and the more cans you can put on that barge/string of barges the more you amortize that cost. Typical container barges are stacked at least 3-4 high while a roro can only be stacked 1 high.

Grain is also not great for containerization - grain transports tend to be railcars, or in the ship mode, handled by big vacuum systems and open holds filled to the brim. 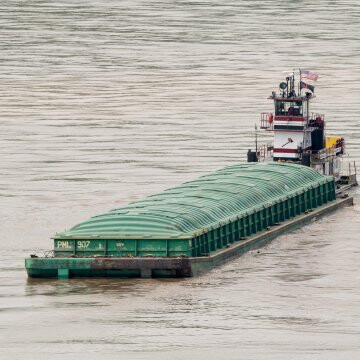 A lot of the infrastructure is set to delivery bulk goods to the ports routes already, but it’s not like you can make new rivers, so there’s a limit.

The numbers aren’t sold well. We need to spend an additional $47 Billion over the next 17 years beyond what is already planned (call it $2.76B/year) in order to keep $1.5-3B (per year?) in sales (merely sales, not profits).