Hey all, I’ve been using some “CyberPower” UPSes over the last few years. I’ve got one hooked up to the 3D printer, and one hooked up to a PC which runs ML training. Overall, they work pretty well, helps to keep long-running 3D prints and jobs going reliably.

Last night, one of the units started beeping incessantly, with the F03 error code. Power cycled it and it looks like the included SLA batteries are dead. 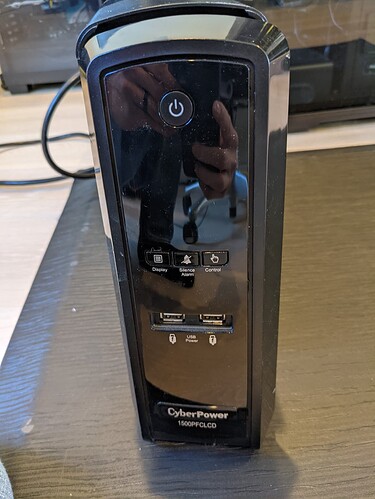 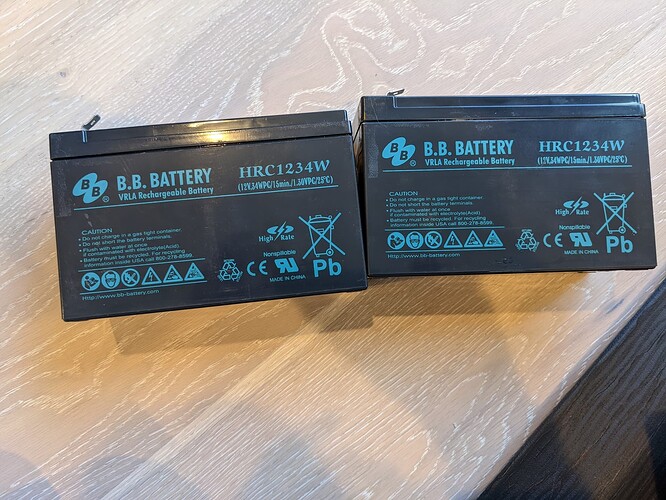 It seems like SLA replacements are easily available, but would it make sense to go for a LifePO4 pack instead? I’m thinking something like this: 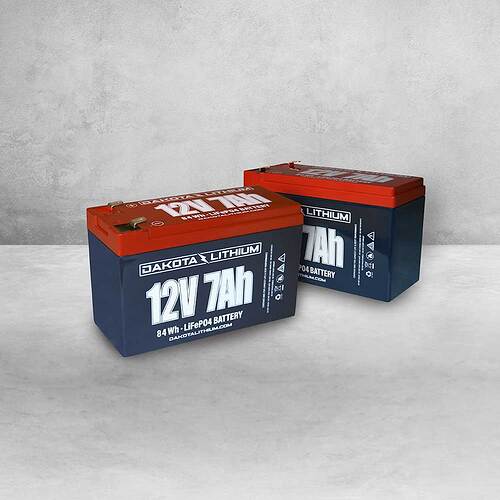 Two pack of our most popular SLA replacement batteries. Replaces UB1280 and many other applications. Built Dakota tough, this is a battery will last up to 5 times longer than your typical SLA battery while providing twice the power at half the...

It seems like SLA replacements are easily available, but would it make sense to go for a LifePO4 pack instead?

It would work, but it’s a bit of a waste of a lithium pack, and I’d be willing to bet that the voltage curve on it would throw any UPS for a loop in terms of estimated time remaining. Lead has a fairly linear discharge curve, LFP doesn’t.

The standard UPS float voltage is fine for a 4S LFP pack. I’m just not sure I’d spend $100+ for $20 in cheap lead acid replacement. If it actually lasts 5x longer, great, but I just put lead in my UPSes.

Those are listed as a 10A max continuous discharge, though. How many amps would your UPS be pulling? They also mention not using a lead acid charger on them, which a UPS would be - though it may not matter if the UPS really just does hold them at float, as most should be doing.

What voltages does your printer actually need? Battery backing a printer seems a lot easier if you skip the whole 120V conversion thing in the middle. Run it off a battery, put a charger on the grid side.

What voltages does your printer actually need? Battery backing a printer seems a lot easier if you skip the whole 120V conversion thing in the middle. Run it off a battery, put a charger on the grid side.

I’d be willing to bet the internal AC->DC is either 12v or 24v, although for the controller board it probably drops to 5v, possibly 3.3v depending on the CPU. But anyway, the main power I’d bet is 12v or 24v.

For UPS batteries I just order the replacements from places like refurbups. Probably not the cheapest but works well.

Nice, refurbups is exactly what I need. It’s so inexpensive to get a replacement that you’d really have to get “5x” the life out of a LifePO4, and that may just not happen for a variety of reasons. There’s one local battery shop that I want to try out, and if that doesn’t work out I think I’ll order from refurbups.

Final update here: I found a local battery shop here that sells refurb UPS batteries for $12.95. Just replaced all of the ones in all UPSes because that’s a good deal and it supports a convenient local business. They say that their refurbs are taken from hospital equipment where they need to replace an entire battery bank if one battery goes bad, and they test all the cells after that and selloff any that still hold a full charge.

I wouldn’t expect a long life out of them, but, sounds reasonable!

I’ve got an extended run battery bank showing up for one of my UPSes (the “core network gear/radios” one), and I think I’m going to mod it so I can turn the beeper off with an external switch.

Lol yeah, the “mute” button on my UPS is more of a recommendation rather than a requirement…

@Syonyk How big of an external? I’ve got an APC Smart-UPS XL (SUA1000XL) that runs my network rack, including POE for the APs, for nearly an hour. I’ve thought about getting one of these expansion batteries, which would probably increase the runtime to 4+ hours.

This expansion bay is 4x of the same thing, so should be triple the runtime.

In terms of what that actually is… I honestly don’t know. The beeper is annoying enough that I typically shut it off before it runs dry. I should do some testing. I have the big loads (homeserver and such) on a rack mount UPS, and the network gear chained off that UPS (it works fine), so I can get network access long after the big rackmount one has quit.

For anyone around the bay area, I have several APC UPSes (desktop and rackmount) free to good home, no batteries. I should be able to provide wiring harnesses for almost anything.

I have been buying batteries from apexbattery.com mainly because they have ridiculously low shipping prices to me at least. (2*12V 18Ah shipped for $14??!!) your mileage WILL vary. I have no clue how they can ship so cheap.

You move a lot. As you ship more stuff with UPS/FedEx, your rates drop. Random person rates are obscenely high compared to big shipper rates. If you get big enough, they literally drop off trailers and you fill the trailers, interface with their systems, etc.

I was getting some smaller discounts when I was moving a ton of batteries (hazmat fees add up in a hurry to get you into the higher price tiers), but I never got into the really good discount rate categories.

One of the best perks they used to have at Microsoft was being able to use their mailroom to send things with UPS. You still paid cash, but at Microsoft’s shipping rate

Their rates were less than half of any other site’s S&H prices. I don’t know how you get that big of a discount, but I appreciate being able to just have the batteries arrive at my door.